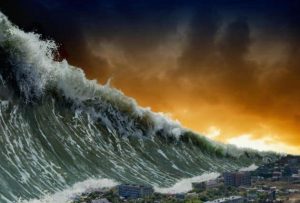 Death bells toll in every clime

For the flotsam of humanity,

Drifting on a fateful tide of time

After tumult on the azure sea.

No pity in its grasping thrust,

The darkest side of nature’s lust,

Across the spread of beach and isle..

O where were the Seers that future see,

Beguiling some with visions far?

From them came no warning plea

Of devastation at that hour.

Perhaps they spoke and were not listened,

Through ancient tomes or days now;

To go unheeded as attractions glistened;

Counter thought to not allow.