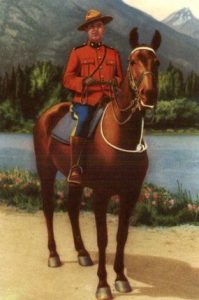 The Sioux Chief, Sitting Bull, after the battle of the Little Bighorn, where he and his warriors wiped out men from the 7th US Cavalry under the command of Colonel George Armstrong Custer, fled with his people to Canada which he called ‘The Land of the Great White Mother’, a reference to Queen Victoria. On crossing into Canada, he was warned as to his expected good behaviour by a small group of Mounties of whom he had the greatest respect.  The other reference in this poem to ‘The Great Lone Land’, is taken from a book on Canada written by Sir William Francis Butler (1838-1910) who was from Southern Ireland and a great British Army soldier adventurer of the nineteenth century. His recommendations to Sir John Alexander MacDonald (Canada’s first Prime Minister) and knowledge of the Canadian wilderness were instrumental in the formation of the North West Mounted Police, later to become the Royal Canadian Mounted Police, now seen as one of the symbols of Canada.

Land of the ‘Great White Mother’,

Dominion from sea to sea;

Her laws enforced by no other,

As the Settler roved, no matter where,

They saw coats of red already there,

On this creation vast and grand.

A legend in the haunt of the free,

Across mountain, river and plain;

Heard of by all, the Sioux and the Cree,

Respect their goal to attain.

Seen by Bear, the Eagle, the Caribou,

Subservient to none but their Queen;

Roaming the wilds by horse and canoe,

Those men both lithe and keen.

They watched the Miner toil for gold

And the hunt of the Eskimo;

Despite driving wind and snow.

MacDonald’s force to give them due,

Prepared for peace or the fight.

The Buffalo crest they made their own,

With leaf of the Maple tree;

Surmounted by Crown, their fame sown

Across every land and sea.

They lit a torch in that bygone year,

Still undimmed by shadow or flaw;

Carried in pride without favour or fear;

Their Country’s symbol and law.