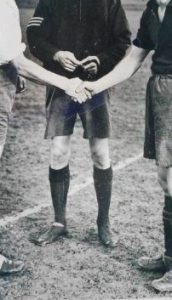 Spare a thought for the old Referee,

One contemplates, ‘Why does he bother?’

Abused by one side or the other.

The dancing mob yell insults at him,

To place his parentage somewhat in doubt;

Ignoring them all with face looking grim,

He gives not a damn what they shout.

He presides from here to there;

He prances with poise and flair.

Woe-be-tide the one who goes nose to nose,

Yellow or red card, off the field sent;

The vernacular around him ebbs and flows;

The offender given time to lament.

A policeman warns a young boy to pipe down;

To think of his Mother; his language to watch;

He looks up at the officer, face in a frown;

“But Mister”, says he; “This is a football match”.