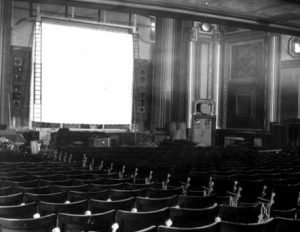 This poem was written about 1911 and refers to Banbridge in the County of Down and its first Picture House situated at Kenlis Street in the town.  The composer was Hugh Alexander aged 19 of Ballydown, who served his time as a mechanic in Kennedy’s Linen Factory, Banbridge.  The Proprietor of the Picture House, Mr J.U. Finney had the poem reproduced on hand bills as an advertisement.  A Mr J. Conlon of Kidderminster, England, had memorised the poem as a boy and believing the author had emigrated to the USA, sent a copy to the Banbridge Chronicle Newspaper in 1961 for publication, otherwise it would have been lost.

Dismal Jonah was a man who had so many ills,

It took near all his wages to keep him up in pills;

One day when feeling rather bad he called in Dr Jones,

The doctor said that he would die in awful solemn tones.

And sadly down the sidewalk he was walking home to die,

Now Jonah in a picture house had never been before,

But still he planked his money down and shuffled through the door.

And when he got a cosy seat somewhere about the back,

He laughed until he nearly got a dislocated neck.

For a picture of Polidor was showing on the screen;

Polidor’s the funniest man the world has ever seen,

With the Cowboys and Indians and the prairies of the West,

With Simple Simon, Tweedledum, John Bunny and the rest.

He was so much delighted that he came back each night,

And strange to say his wretched health began to get all right.

Mind, with all this laughter, he got so blooming stout,

They had to make a special door to let him in and out.

So, if you’re fond of laughing or if trouble fills your mind,

Or if you’re fond of dramas or if courting inclined,

If you’d like to see the world and can’t afford to go,

Just come along to Kenlis Street and see the Picture Show.