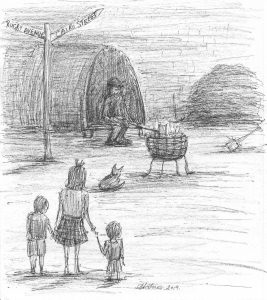 There was a time when municipal repairs being carried out on the streets of Belfast warranted the presence of a Night Watchman to guard the gear and material used during the day.  To facilitate him he was supplied with a hut or shelter, a large round iron brazier and a pile of coke (cinder residue of gas producing coal) from the Belfast Gasworks dumped at the site for him to burn and keep warm.  Children found these arrangements fascinating.

The watchman’s hut in dead of night,

Beside the brazier burning bright;

A pile of coke against the wall,

Source of heat in winter’s pall.

I remember well that homely fire,

That glowed as others did retire;

An attraction for the tabby cat,

Curled up beside there it sat.

The watchman staring at the embers,

A sight serene one remembers;

Implements of toil scattered all around,

Picks and shovels on the ground.

There we’d stand in the welcome heat,

Watchman in repose upon his seat;

Wrapped up against the north wind’s blow,

As the hours went passing slow.

In the night beneath the stars;

Fork of wire to hold it steady,

Until all golden brown and ready.

Then scratching scary sounds of night,

Senses knowing though half asleep,

Creatures walking and those that creep.

Then one by one we’d melt away,

Too late to hang around or stay;

In lonely vigil we’d leave him there,

At the brazier’s heart to sit and stare.