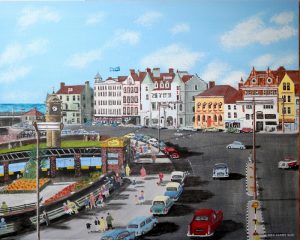 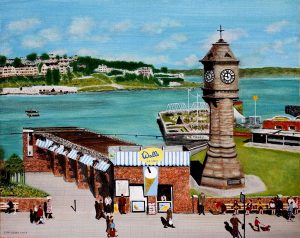 The realigned face of Old Bangor

Up at the top of Down;

Hardly a sight from the past,

In this resort of esteem and renown.

But the Bay is no longer there;

All those yachts and jetties,

I could only stand and stare.

Upon that eternal rock;

Gone as well, the Pool itself

To which we used to flock.

No coal from blackened puffers,

Being piled high on the quay;

Where the little boats took their rest

From ventures on the sea.

An excellent place to fish from

By men and boys with their gear.

Then said I to a passer-by

If I could hire a boat from Laird;

He looked at me with a wistful smile,

They were gone and I hadn’t heard.

On sauntering along by that old wall

I saw the McKee Municipal Clock;

Impressive and tall as it ever was,

Made from precision cut sandstone block.

Still to be admired is the Harbour House,

With its old square cornered tower;

From which were observed the Windjammers,

All one sees now is a boatyard

And craft stripped ready for paint;

With stainless steel fittings and halyards,

So I turned on my heel in an instant,

Going back the way I had come;

Its hard to accept all the changes,

I suppose its all right for some.

They developed a natural feature,

With a Civic idea of fun;

Obliterating all in the process

Around which we used to run.

Then I was back at the old Sea Wall,

With its wave rutted copes of stone;

As a reminder of another time,