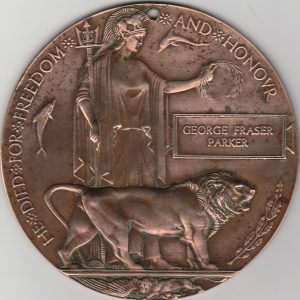 Corporal George Frazer Parker, 13849, 8th Battalion, Royal Irish Fusiliers, died aged 25, on Wednesday 6th September 1916 and is remembered with honour at Delville Wood Cemetery, Longueval, France.  Corporal Parker was the son of James and Margaret Parker, Drumbanagher, Jerrettspass, County Armagh.  After the Great War they were the recipients of a bronze plaque in honour of their son’s sacrifice which reads, ‘HE DIED FOR FREEDOM AND HONOUR’. One morning decades later it was found in the ruin of their family home.

The house it was a tumbling ruin

A home it once had been;

Debris of a lifetime widely strewn.

Where floor and hearth had been.

Dank decay had worked its will

On fabric, wood and plaster;

Nothing stirred the air so still;

Gone Mistress and the Master.

Among the fragments and the dust,

Lay a tarnished disc of glory;

For ‘Freedom and Honour’ to entrust;

Times on the wall in pride of place,

Death from the foe he had to face;

Shell, shot and the screaming.

All departed, the last of his line,

Their sorrow and the tears;

Forgotten symbol of a precious Son,

With no one left to mourn;

In the dawning of the morn.