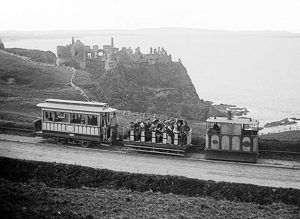 The Bushmills to Portrush Hydro-Electric Tramway, built in the 1880s was the first of its kind in the World, an engineering feat by men of talent and vision.  It is regrettable that circumstances dictated it had to be closed and dismantled in 1950. Many times, as a child with my parents I waited beside the track for the train to arrive.  I still remember the thrill of seeing it approach along the rails that ran atop the limestone cliffs, which seemed to take on mythical shapes overlooking the sea.

Around the north corner I wander and roam,

Where gale and the gannet skim o’er the foam.

I’ll stand where the land falls away to the sea,

With dune and seashell between water and me.

Out to the West from whence the wind blows,

Then to one’s right at the ‘White Rocks’ to stare,

Scene to be savoured so splendidly rare.

Head of the Giant his beard on the shore,

Captured in stone with his nose to the fore;

Sea spirits eternal, dance around him with grace,

So always he has a smile on his face.

Caressing his brow, they scamper and bound,

Up over the headland, in caves on the ground,

Through the ‘Arch of the Wish’ like sirens they go,

As waves crash and beat the boulders below.

Retreat of the tide along this wild scene,

Uncovers the winkle where water had been,

Clinging to rocks on which fishermen stand,

Casting lured long lines out from the land.

I remember the Tram that used to run here,

On a track that meant it was easy to steer;

From the ‘Port’ to the ‘Bush’ it cantered along,

On hard wooden seats, folk within and without,

The shopper, the worker, tourist looking about;

They gazed at ancient Dunluce in sunshine or rain,

A rugged stone beauty from that little train.

The Driver hunched over controls made of brass;

Machine sweeping by clumps of harebell and grass;

This magical scene in my mind I now see.

With dune and seashell between water and me.