I had a friend and neighbour in Belfast who was an English woman, namely the late Mrs Joan Mee (Nee Wragg). When she died, her daughter Abigail Kirby-Harris gifted to me a poem her mother had treasured having always displayed it on a wall in her home. The poem had been written by one of her colleagues in World War II under the heading ‘Ceylon in April’. The composer was Barbara Joan Harding, born Darjeeling, India, 1925, the daughter of Horace Harding, then Head of Associated Electrical Industries in India, based at Calcutta. Her mother was Mavis Harding an Australian. She had been educated severally but finally at Malvern Girls School from where she joined the Woman’s Royal Naval Service in April 1943, the same day as Joan Mee. They were subsequently posted to India as Wireless Telegraphists and were finally based in Colombo before being demobbed in 1946. I now share with the reader Barbara Joan Harding’s poem as I received it. 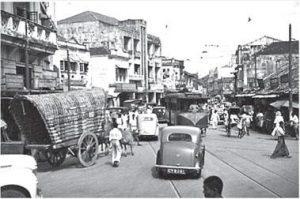 I too remember hawthorn

In a May time land.

But oh, for me, my heart is free

And every ripple through it blows

A scent of laughter lingeringly

And symphonies that no man knows.

For me no eyes can dim the sky.

Though no man smile, the sun is bright.

In every flower lurks delight

While in the music of the sea

And would I change for one wild rose

These flame-flowers burning in the sky,

Where this bright creeper proudly shows

Would April lilac smell as sweet

As this white beauty in the heat,

Laid swooning at her feet?

White roses on a sandstone wall,

But here where sunlight steeps the sea,

Are lovelier to me.

I was not desolate before –

I stood upon the wild seashore

And saw the white sea-horses ride

Tradition on an English tide.

Did not one starfish stir in me

An echo of a mystery?

Or one white star above the sea

Waken a dream of ecstasy?

I was not desolate before.

O, why should I hear ceaselessly

The thunder of an alien sea