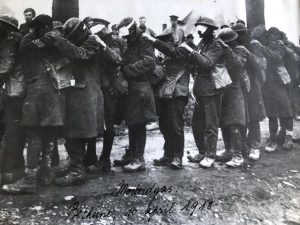 A Trooper was Tom Cammock, in the Royal Horse Artillery

Who faced the Boer and German, far across the sea

Riding on the lead horse, with cannon behind the team

It was the germ Malaria, that took him from his gun

Having fought in Africa succeeding to survive

Was years after sent to France and still remained alive

But there the Foeman got him, by devious means alas

With bandaged eyes he left, that bloody battlefield

A half blinded future, fate for him had sealed

As a boy I watched him, shuffling along by the Gasworks wall

That unsung little Hero, who one time rode so tall

He dwelt for thirty years and more, at his Belfast abode

In the Street of Havelock, just off the Ormeau Road

With his wounds he suffered, the years filled with pain

Until the Lord called him home, a life not lived in vain

Viewing those marching Veterans and on hearing the bugle call

I see Trooper Cammock on the lead horse, mounted proud and tall

In conflict as a youth and man, on a foreign field

Emblazoned in his nature, to not give way or yield