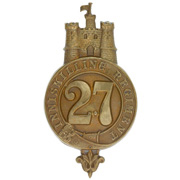 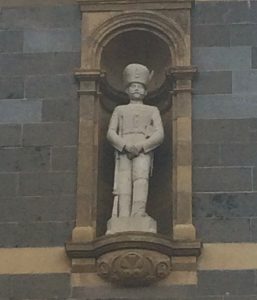 At the beginning of the 19th century more than 50% of the British Army was Irish.  I focus here on the 27th (Inniskilling) Regiment of Foot, later to become The Royal Inniskilling Fusiliers.  One of their most famous battle honours was gained at Waterloo in holding the ground at the centre of General Wellington’s line against a ferocious onslaught at that point, thus thwarting this well proven tactic by Napoleon to achieve victory as he had done in previous battles.  The 27th(Inniskilling) Square did not break or yield and out of 698 Officers and men, 480 were lost.  Wellington (The Iron Duke) acknowledged their great valour and it is said that Napoleon commented on their stubbornness.

On the Townhall Tower, Enniskillen, in the County Fermanagh are two niches holding statues of an Inniskilling Fusilier and an Inniskilling Dragoon.  In this way the town of Enniskillen has honoured two famous regiments, the spawn of its bosom.

Soldiers of stone high up in the wall,

Look down on the Town below;

Forever on guard, proud and so tall,

The Fusilier stands his gun at rest,

Here in the land of his birth;

Times the foeman put him to the test,

In many a corner of Earth.

To north, south, east and the west,

A renowned soldier was he;

At Waterloo a ‘Square’ on the crest,

The 27threpelled sabre and lance,

Were pounded by shot and shell;

That keystone held against the advance,

A story for others to tell.

Unbroken ‘Square’, dead on the ground,

The centre held safe in the killing;

For these men of the Inniskilling.