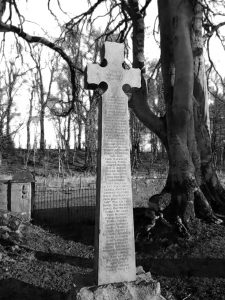 In Southern Scotland near the little town of Thornhill in the valley of the River Nith, is old Dalgarnock Graveyard.  The Church and Village that once existed beside it have long been obliterated, by those requiring an easy supply of stone to build elsewhere. However, preserved just inside the gates to the burial ground sits a baptismal font and a few feet away stands a modern high granite Cross bearing 57 names of local men.  Above the list one reads, ‘For Christ, Church and Covenant – The Nithdale Martyrs’.  A caption at the base of the Cross states, ‘From their Australian admirers’.  A lot of Covenanters came to Ulster in their quest for religious freedom and for many years Covenanter Meeting Houses were a feature in the Northern Irish countryside.  Some of my paternal Grandmother’s family attended one at Loughbrickland in the County of Down.

At the vale of the Nith in Scotland’s bower

A voice from the past came to me;

As I watched the winding river’s power

Ambling its way to the sea.

It was the call from a Covenanter

Whose loyalty was to his God;

To an earthly King he was a Dissenter

To lie ‘neath his native sod.

He and his peers so sure in belief,

Hunted by trooper and horse;

Some thrown in the water course.

The fervour burned on in those who fled

Away from Scotia’s shore;

To tell the tale of how they’d bled

At their ancestral core.