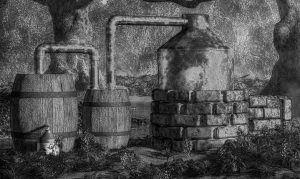 An old fellow of Toomebridge was licensed to fish,

In the River Bann and lough Neagh;

He got a ‘still’ made and began a new trade,

When fishing for eels did not pay.

The Poteen he made was a powerful stuff,

And cheaper than whisky or gin;

The customers came from all over the place

And lashings of money came in.

Now the law is severe on people who make

And peddle such liquor for sale,

And Judges are apt to impose heavy fines,

With time for repentance in jail.

That’s why the old fellow was greatly perturbed

When a stern looking Sergeant came to the door

And caught him red handed one night.

In front of the Sergeant he went on his knees,

For mercy to beg and implore,

And by Joseph and Mary fervently vowed,

“Get up”, said the Sergeant, “You’ve no need to stop

Your arrest is not what I seek.

I simply called to give you an order,

For a couple of bottles a week”.