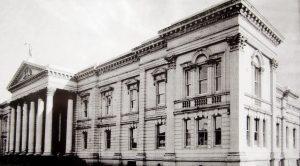 The Belfast Gaol and Courthouse were both built in the 1840s facing each other on opposite sides of the Crumlin Road.  A tunnel under the road connected the two buildings for convenience in transferring prisoners in either direction.  There were many, both staff and prisoners, who found ‘The Tunnel’ oppressive and claustrophobic.  The last prisoners occupied the prison in 1997 and the courthouse closed in 1998.  The following poem reflects on these historic buildings.

In Belfast’s sprawl below Cave Hill, on the Antrim side of town,

You’ll find the sloping Circus of Carlisle in that City of renown;

‘Twas just there in days gone by that ‘Roaring Hanna’ stood,

Mounted and froze in sculptured bronze, his dogmatic mood.

Beyond what was to the back of him, the Crumlin Road doth lie,

To pass a building on its left, where ‘Justice’ stands on high;

Proudly raised upon that Greek façade, she’s poised in majesty,

Hand uplifted to the heavens, holding scales for all to see.

In those hallowed halls cloaked advocates plied their chosen trade,

Shrewdly swaying Judge and Jurymen, with decisions to be made;

Gilded Lion, Crown and Unicorn, above wigs of those aloof.

Here appeared the Felons who flaunted the laws of this northern land,

Scripted charges there to be answered, in the ‘Dock’ to stand;

As the ‘Learned’ proceeded with care, at times the accused went free,

Others damned and condemned by evidence, to lose their liberty.

And thus, to be led through ‘The Tunnel’, to Gaol across the road,

That partner of ‘Justice’ awaiting, part of the punishment code;

Deep and dour were the thoughts of those taking that sunken route,

Perhaps guilt or innocence of foul crime no longer in dispute.

Inside that edifice of dressed cut stone is a double cell of gloom,

There they sat with head bowed, forced to contemplate their fate,

Throughout the night and each day until the hour was late.

Outside that room they heard the noise, of others within those walls,

Whose lives were grim but not as theirs, to ‘live’ inside their stalls;

The hopeless sat, or lay or stood, future faced with dread.

The person safe in their keeping, as life the hours did steal;

Unease was rife amongst all there, the ‘Reaper’ astride that place,

As the condemned their soul did search, final trial yet to face.

The Cleric prayed on the approach to eight, being the statutory time,

When the ‘one’ was set to forfeit life, for assumed regretted crime;

With pressure steam-traps clanked and creaked, in those galleries high,

All listening for crash of bolt and trap as the time drew nigh.

The wheeled wardrobe cunningly pushed aside, revealed a hidden door,

For the ‘Subject’ to pass through, being ushered across that floor;

Then manoeuvred forth onto the hatch, with hood and loop in place,

Lever pushed and they were gone, to ‘eternity’ through that space.

The contraption now dismantled and gone, only flat irons there to see,

On the underside of that deadly floor, where the trapdoor used to be.

Cells have been emptied, no crashing doors; eeriness of the past abides;

In shadowy rooms, across galleries high, where spirits still reside.