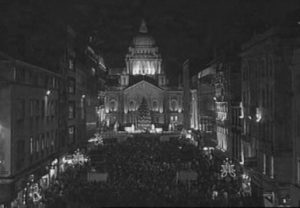 I stood at Belfast’s City Hall

And heard the President make the call;

To thousands of people gathered there,

Addressing them with panache and flair.

On reasons why the peace should hold,

So in future days it would be told;

How reason and tolerance won the day,

With tranquillity the state of play.

He was supported by those of every hue,

Showing respect which to him was due;

The truth from him did surely flow.

Suddenly there was an emerging chink of light,

Beaming forth from left and right;

From Ireland’s Sons and Daughters everywhere,

Showing the World that they did care.

Joining their voices together as one,

To overcome, bullet, bomb and the gun.

The violent men skulking in their lair,

The groundswell of opinion against their kind,

But they know in their heart of hearts,

Its woe-be-tide to him who starts,

To break this fragile new-found peace,

Being distilled as people’s hopes increase.

Thanks for everything, you carried the day”.